Gratitude for Teaching: A Mirror to the Soul

My friend Evi Wusk asked me to write a guest post for her blog, Gratitude Gal, about what I am grateful for as a teacher. The reflection that resulted has been a game-changer for me. It’s been a busy and challenging school year, but digging deeper about why I continue to choose to be an educator has uplifted my attitude and helped me deal with the daily challenges of teaching. 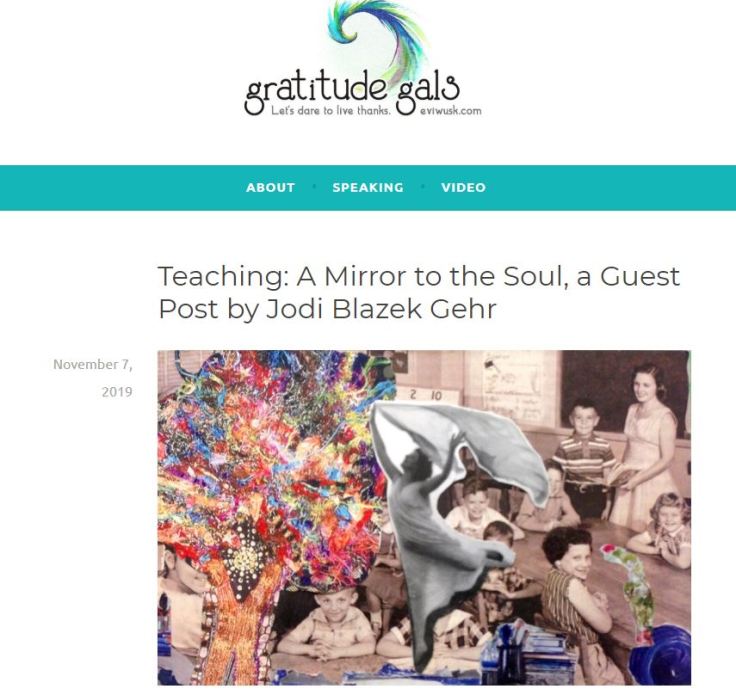 Here is what I wrote:

“Gratitude at its deepest level embraces all of life with thanksgiving: the good and the bad, the joyful and the painful, the holy and the not so holy… I am gradually learning that the call to gratitude asks us to say, ‘Everything is grace. “–Henri Nouwen

I am grateful to have had two grown-up careers—five years in advertising sales and the past 23 years as a Business educator. It is teaching that has taught me about the importance of practicing gratitude.

I am grateful to see teaching as a vocation, not just a paycheck. When I made my career change, it was certainly not for the money. I have never looked at teaching as just a job; it is a spiritual calling. Parker Palmer in The Courage to Teach writes, “I believe that knowing, teaching, and learning are grounded in sacred soil and that renewing my vocation as a teacher requires cultivating a sense of the sacred.”

I am grateful that I have stayed in education even when it can be soooo hard. Several years ago, I tried to capture the essence of the evolving nature of teaching through SoulCollage®. When I started my first teaching job, I was incredibly naïve and idealistic about what it would be like, represented by the black and white, “country school” image —students with smiles on their faces, eagerly waiting to learn, happy, compliant, respectful, and totally mesmerized by every word I said. The reality is that teaching is a much more “colorful” role than I had expected or could have imagined. END_OF_DOCUMENT_TOKEN_TO_BE_REPLACED

Quantum Entanglement, The Invisible Tug and The Temple of God 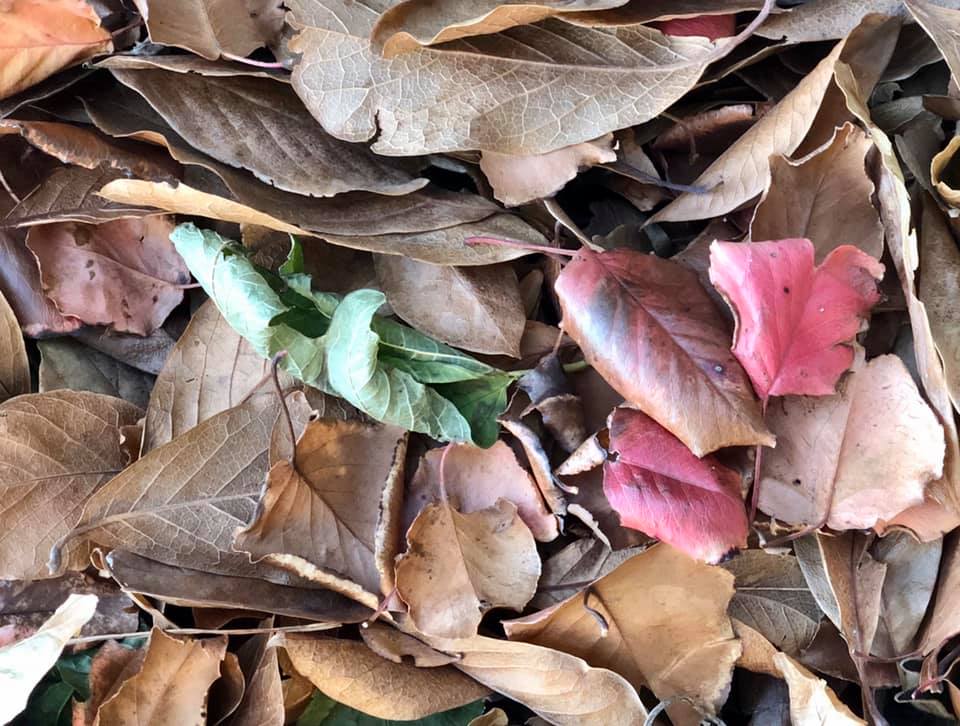 Things happen in threes, they say.

Just in the last few days, I have been impacted by three distinct impressions—a reflection written by Richard Rohr, a poem penned by Emily Bass and a Lectio Divina reading and discussion at our monthly Oblate meeting.

All three Things point to the divine, invisible, and yet very tangible, connection that exists between us.

Thing One—a friend forwarded an email from the Center for Action and Contemplation by Richard Rohr about “quantum entanglement.” He describes quantum entanglement as “a wonderful illustration of the interconnected nature of reality, both spiritual and material. In quantum physics, it appears that one particle of any entangled pair ‘knows’ what is happening to another paired particle.” 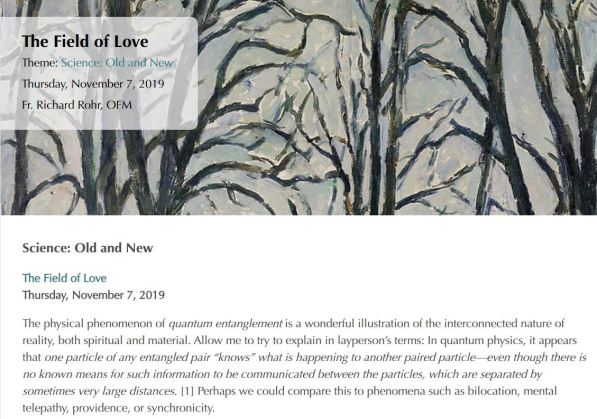 Deeply-felt intuition and synchronicities that occur in our lives may be explained as a mere coincidence by some or the work of angels, saints or Divine assistance by others, but Christianity embraces the idea that quantum entanglement, despite the vocabulary used, is a spiritual phenomenon that very much exists. But what does this mean for us as we live out our daily lives?

Rohr writes, “We must deliberately choose to be instruments of peace—first of all in our minds and hearts. This is conscious quantum entanglement.” We make a difference in this world—who we are and how we behave impacts others.

Thing Two—Parker Palmer, one of my favorite writers, shared a poem by Emily Bass on social media followed by the comment, “What if you felt the invisible tug between you and everything”? (Sounds a little like quantum entanglement…)

The World Has Need of You

I can hardly imagine it
as I walk to the lighthouse, feeling the ancient
prayer of my arms swinging
in counterpoint to my feet.
Here I am, suspended
between the sidewalk and twilight,
the sky dimming so fast it seems alive.
What if you felt the invisible
tug between you and everything?
A boy on a bicycle rides by,
his white shirt open, flaring
behind him like wings.
It’s a hard time to be human. We know too much
and too little. Does the breeze need us?
The cliffs? The gulls?
If you’ve managed to do one good thing,
the ocean doesn’t care.
But when Newton’s apple fell toward the earth,
the earth, ever so slightly, fell
toward the apple as well.

Parker writes, “Hard as it may be to believe, our little lives and actions make a difference. There are more than enough people of good will among us to resist the power-hungry, wealth-obsessed, anti-democratic forces that threaten us. If enough of us do what we can—bit by bit, day by day—we can tilt the earth toward sanity and humanity.”

Phrases that resonated with our group:

You are God’s building—another is building upon it—be careful how he builds—you are the temple of God—dwells in you—you are….holy.

We are the temple of God. Despite our sense of worthiness or participation in good actions, we are the dwelling place for the Spirit of God. We are holy.

This foundation is firm, but we must be full of care in how it is built upon. We must be careful how we build upon another’s temple or let others build on ours. We must protect ourselves, our temple, with what builds us up. We must be careful what we send into the universe— that it builds up rather than tears down.

We are entangled; we feel the invisible tug of the other; and, yes, we are connected to each other, can make a difference and have an impact. I work with God on the building of the temple. We are co-builders with Christ.

The temple may be destroyed but will rise again. It happened with Christ, it happens over and again throughout history, and it will in our own life.

The temple is WHO I AM. I need the One who can rebuild. It is through Christ living in me that I am able to build myself again and to build others up. Nothing can destroy our temple, a blessing freely given from God.

Yes, I think things happen in threes—at least this week they did.

Quantum Entanglement, The Invisible Tug and The Temple of God. Words of wisdom may come from a variety of traditions or sources but point to one Truth.

Be careful builders. Be intentional. Be peace. Amen.

As a high school teacher, I am concerned about the level of attentiveness my students pay to their teachers and classmates. I wonder how often they are truly present to another, not to mention their own emotional, spiritual, intellectual and physical needs.

Their cell phones have become so distracting that I fear they lack the social skills needed to develop personal relationships that are essential to living a full and rewarding life, not to mention becoming a valuable employee and citizen. Students have shared that their phones have become a tool to avoid fully engaging with others or the moment—when experiencing discomfort, their cell phones provide an escape.

I know this is not a phenomenon exclusive to teenagers—many adults struggle with respectful and appropriate use of technology as well. I need to practice awareness myself.

Deeply saddened (and frustrated) by this, I was struck this morning by a commercial using the hashtag #EatTogether with this heart-warming message:

Each of the characters would have likely gone to their apartment for a meal alone if it not for the family who extended a hand of hospitality and an offer of a meal to include everyone.

Of course, we need our solitude, but how often do we consider the one who may need an invitation? Who needs to be accompanied? Who needs a meal? Or who has more than their fair share of solitude, and desperately needs to be noticed?

We must look up long enough from our cell phone, and all the distractions of a busy life, to remember the Benedictine value of practicing hospitality.

St. Benedict insisted that hospitality be one of the highest values for monasteries, writing “Let all guests who arrive be received as Christ.” (RB 53:1) Being hospitable is our opportunity to respond to God’s great generosity towards us.  Hospitality is being present to others—taking time to enjoy one another’s presence and being attentive to what the other is sharing.

The #EatTogether commercial is the brainchild of a Canadian company President’s Choice-NatureFresh Farms. Concerned with the challenging task families face with balancing work, activities, children, sports, and school combined with the increased use of technology, they hope to inspire families to remember the importance of eating meals together and extending that invitation to their community—in other words, practicing hospitality.

“The monastery was to be a place of comfort and of solace and of safety for everyone. The monastery was the place where anyone would be welcomed., where rich and poor alike could come and find seats side by side despite the world around them where status counted dearly and classism was a given.”—Joan Chittister, Wisdom Distilled from the Daily

Offering a meal, listening, and paying attention to the present moment are all ways that we can be a monk in the world. We can offer comfort, solace, and safety for others. We can welcome all.

We can extend this hospitality for those people who are in our daily lives—at school, work, home, down the street—but we are also called to extend hospitality to “those living on the margins.” There is room at the table for everyone, as Carrie Newcomer writes—

How can you practice hospitality with your loved ones? At your workplace? In your neighborhood? With those marginalized?

*Photo in heading taken in Montes de Oca, Argentina with the Mogues family. The importance of the family and community meal has not been forgotten this family or country.

For more on hospitality:

Let all guests who arrive be received as Christ: Hospitality and The Holy Trinity

Ode to Mary: Lover and Giver of Life