Put on a Heart of Compassion

For our Lectio Divina practice, we read more deeply Colossians 3:12-17

We share aloud, some of the words and phrases that resonate with us:

Let the peace of Christ control your hearts. Be thankful.

Let the word of Christ dwell in your richly. Gratitude in your hearts.

Compassion: We think of compassion as feeling sorry for someone, but it is to feel with someone, to enter into the sufferings and joys of another person. Jesus had compassion for us, entering fully into our lives. He is one with us. We are called to emulate this kind of compassion with others. Sometimes there may not be much we can say to another, but we can give our presence, a physical touch. Wordless gestures are just as compassionate, perhaps even more so.

The quest for peace and justice

We honor Dr. Martin Luther King, Jr—advocate for social justice, racial harmony and equality, civil rights and non-violent resistance. In his 1964 Nobel Lecture titled “The quest for peace and justice” he states

“Violence never brings permanent peace. It solves no social problem: it merely creates new and more complicated ones. Violence is impractical because it is a descending spiral ending in destruction for all. It is immoral because it seeks to humiliate the opponent rather than win his understanding: it seeks to annihilate rather than convert. Violence is immoral because it thrives on hatred rather than love. It destroys community and makes brotherhood impossible. It leaves society in monologue rather than dialogue. Violence ends up defeating itself. It creates bitterness in the survivors and brutality in the destroyers.”

Over five decades later, this week of the inauguration of our 46th President, the United States of America is reeling from the insurrection of January 6, 2021. It is also the date of Epiphany, celebrated in Christianity as the date Magi visit the Christ Child, recognizing that Divine Light has become incarnate in our world.

Americans are experiencing an epiphany of their own. Deep divisions that exist in our country have been made clear, brought from the darkness into the light—no doubt, as King stated, “a descending spiral ending in destruction.” How did we end up here? Surely most of us desire the “permanent peace” King spoke of, and yet here we are. I have no answers so I read and re-read the words of MLK and look to my faith for understanding.

I reflect on the opportunity I had last year to attend a concert of The American Spiritual Ensemble (ASE) at a local church—a concert to honor Martin Luther King Jr. with African American spirituals.  MLK wrote that spirituals “give the people new courage and a sense of unity. I think they keep alive a faith, a radiant hope, in the future, particularly in our most trying hours.” In his 1964 book Why We Can’t Wait, he wrote that civil rights activists “sing the freedom songs today for the same reason the slaves sang them, because we too are in bondage and the songs add hope to our determination that ‘We shall overcome, Black and white together, We shall overcome someday’.”

The King Center, a living memorial to MLK, envisions a world where global brotherhood and sisterhood are not a dream but the state of humankind.

Let this be our prayer today—

May we walk together as children of God, that we ease the suffering of those near and far from us, that we stand up for the oppressed—the poor, the marginalized, the downtrodden, the suffering. Let us pray, that through our efforts and the grace of God, that we shall overcome. May this week of Inauguration be peaceful and all involved be protected from harm. Amen.

I write more HERE about the American Spiritual Ensemble, the importance of Negro spirituals and their impact on American music.

Praying with Collage: Seek Peace and Pursue It 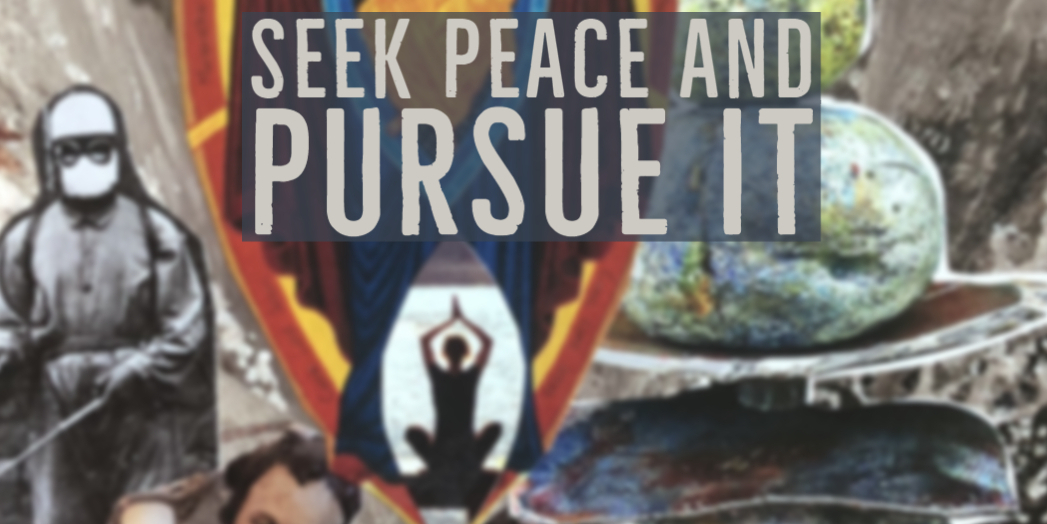 School starts this week. It has been five months since I have been in a real-life classroom with my students. After spring break, we immediately went to online learning for the remainder of the school year.

I have been so encouraged by those who have asked me how things are going, promising their prayers. I was encouraged by my friend, Sara, to create a SoulCollage® card that I could keep at school as a reminder to pray when I am feeling overwhelmed or anxious. My prayer is that I can find some peace despite the fear of the unknown. My prayer is to remember to seek peace and pursue it, as St. Benedict instructs (RB Prologue 17), and to include time in my day for silence and meditation. END_OF_DOCUMENT_TOKEN_TO_BE_REPLACED

You Are Not Alone: My Peace I Give to You

The questions that guided our discussion were: How can we remain peaceful despite the anxiety caused by the pandemic and political division? And in light of our Lectio Divina readings: What did Jesus mean by the gift of peace? Oblates of Christ the King Priory met in person at St. Benedict Center for our August meeting, respectfully following safety guidelines of physically distancing at least six feet apart and wearing face coverings. Those who were not able to make the drive had the option to Zoom in.  All are encouraged to follow the 11th Commandment:

END_OF_DOCUMENT_TOKEN_TO_BE_REPLACED

Hearts Burning Within Us

May 2020 Oblate Reflections and Lectio Divina

After a successful inaugural Zoom meeting in April, the Oblates of Christ the King Priory were excited to meet again “virtually” as we continue to physically distance and adapt to the uncertainty that the pandemic brings. We began our morning with introductions, personal prayer intentions and Morning Prayer from the breviary.

Our Lectio Divina reading was Luke 24:13-35, the Emmaus Story. At St. Benedict Center, adjacent to Christ the King Priory and our typical oblate meeting place, all who enter are greeted with a mural of the Emmaus Story. It is the hope of the monks that visitors to the Center may have an Emmaus experience. “Were not our hearts burning within us as He spoke?” (Luke 24:32) Just as Jesus opened the Scriptures, revealing himself in the breaking of the bread, so too can those on the spiritual journey meet the living Christ.

Rich in meaning, there are many words and phrases that resonate with our group:

Stay with us. Initially, the disciple’s eyes were prevented from seeing the Risen Christ when encountering him on the road. They are talking, debating, and rehashing the events of the last days. They are downcast; disappointed, that the one they had hoped would redeem Israel was crucified. They are incredulous, sharing that the women of their group had reported that Jesus’ body was gone. The stranger promptly gave them an Old Testament lesson— “Oh, how foolish you are! How slow of heart to believe all that the prophets spoke!” The disciples ask the stranger to stay with them. In the breaking of the bread, they see him. Isn’t it interesting, an oblate shared, that the disciples were not put off with Jesus immediately vanishing? He vanishes, and yet now they recognize him. It is a paradox that he is gone, but also present. END_OF_DOCUMENT_TOKEN_TO_BE_REPLACED

In Praise of Words and Less Words

Sometimes I just don’t know when to shut up. Words, words, and more words.

I love words—to write them and to read them. I have been considering how I use words after reading The Power of Words by Joe Kay at Living Gracefully. It ­shined a light on the word wars often waged in my head, in conversation, in writing—either on social media or my personal journaling.

In some ways, I give words too much power. I think if I keep talking I might find just the right words to communicate my point better. Maybe my words weren’t effective, or they weren’t heard the way I intended, or my words were rejected—so I try again with more words, thinking “this time” I will be understood or be able to help another understand. Maybe “this time” we will come to an agreement or reach a hoped-for reconciliation.

But words do have power, Kay writes— “Martin Luther King, Jr., understood the power of words. He spoke so beautifully and prophetically about his dream of a world in which everyone is treated as an equally beloved child of God. 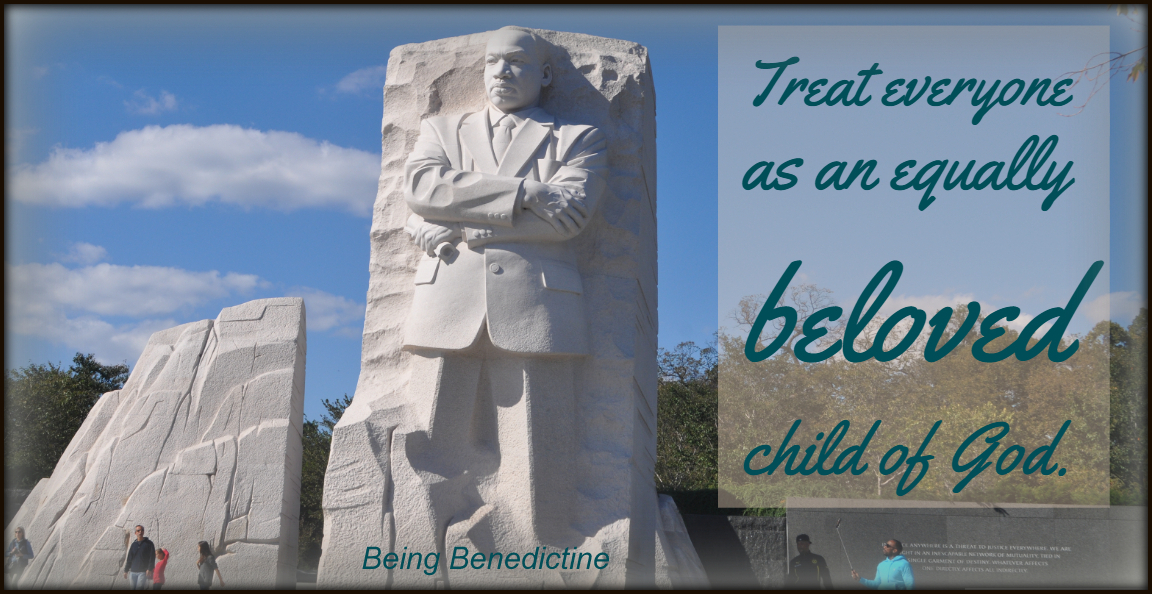 Words have the power to inspire us, touch us, and transform us for better or worse, depending upon which words we choose to allow inside of us. They can bring us more peace, love and justice, or they can increase our levels of division, fear and hatred. In the last few months, we’ve been reminded how easy it is to get sucked into the pool of hateful words. END_OF_DOCUMENT_TOKEN_TO_BE_REPLACED 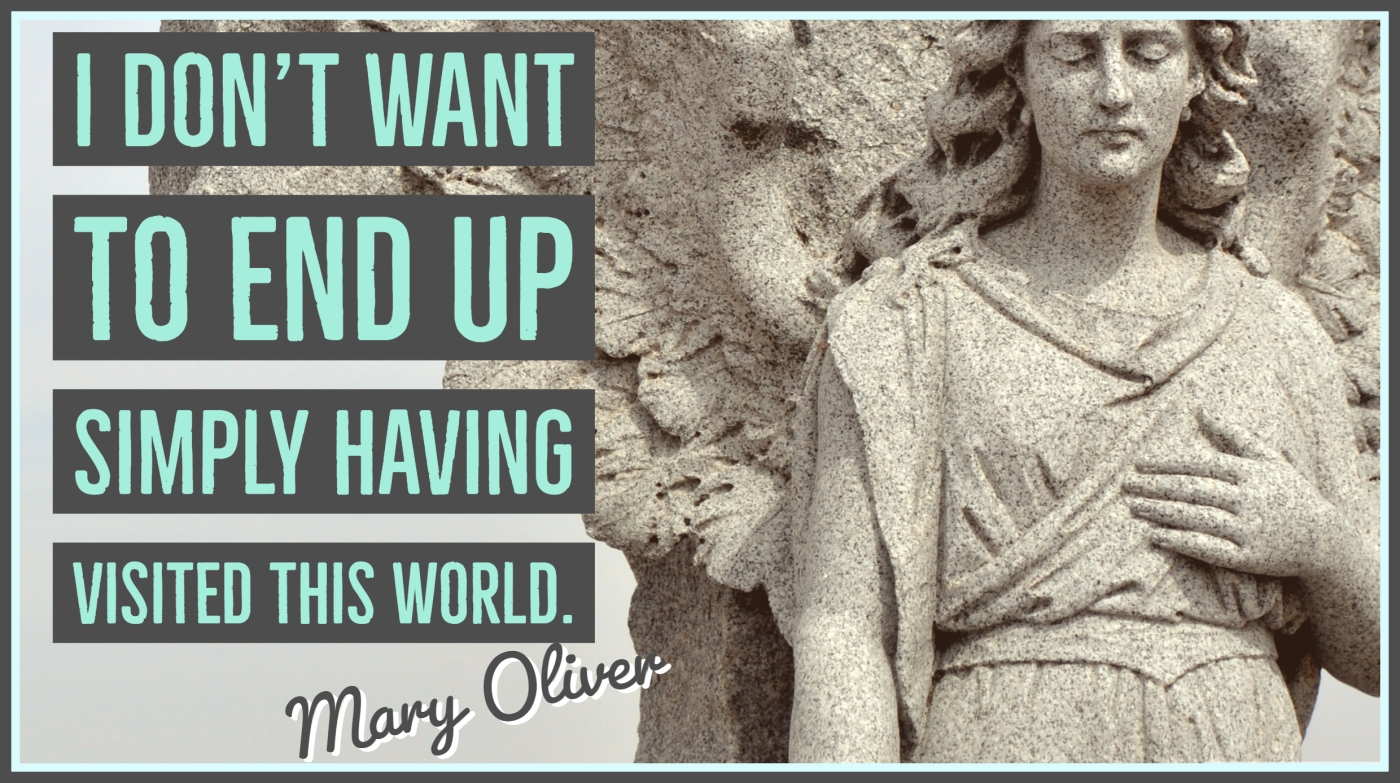 Mary Oliver. She must have loved life.  She deeply reflected upon it and wrote about it so eloquently. She suffered and enjoyed and made peace. And she wrote about it all.

She encouraged us to slow down and enjoy each moment.

“For how many years did I wander slowly through the forest. What wonder and glory I would have missed had I ever been in a hurry!”  —Leaves and Blossoms Along the Way: A Poem

She encouraged us to see the holy that is wholly visible.

“God, or the gods, are invisible, quite understandable. But holiness is visible, entirely.” —Leaves and Blossoms Along the Way: A Poem END_OF_DOCUMENT_TOKEN_TO_BE_REPLACED

Flood the World with Love

Weekend mornings are made for slowing down—for sipping coffee crowned in frothy milk, catching up on reading, and listening to some of my favorite music. This morning my meditation consisted of listening countless times to “I Heard an Owl” by Carrie Newcomer, much-loved folk singer and spiritual teacher, and accidentally reading 1 Corinthians 13:4-6.

Both song and scripture are a meditation of love, peace and courage—and a good reminder of how to be a living light in the world. As the antidote to confusion, fear, hatred, and darkness, we must flood the world with love. END_OF_DOCUMENT_TOKEN_TO_BE_REPLACED

When we see problems, we want solutions. When there is chaos, we desire peace. As over-thinking humans, we think that our incessant thinking will bring us to our desired goal. And the sooner, the better. There is no time to wait around for peace, to slowly work through issues or to wait for answers to present themselves. We want peace and we want it now. But is this God’s way?  Fr. Mauritius shares,

“There are some words in our prayers that I just love. Words such as “gather together”; we monks chant them regularly in a hymn. These words resonate with my longing for unity and peace. In these times when our countries and our world seem to be more torn than ever, this longing is even stronger. It moves me to strive for unity and collaboration, in our small worlds, in our communities, in our families, and in the teams in which we work. When we live and work together as one, things flow better and we are happier and more successful.

However, one time while praying the hymn, I paid closer attention. It says, that all things are gathered together in Christ. Both the original Greek and Latin have a term that comprise the word “head” (recapitulare). The gathering happens in Christ, who is the head. He does the gathering together. This immediately gave me relief. I cannot do it. He will do it. He will gather us all. But, how does he do it?”  Read more at WildeMonk.