Pilgrims Are Not Just Tourists: A Benedictine Pilgrimage, Part 5

“A tourist has new experiences, but remains the same person. A pilgrim experiences new places and is transformed by them.” —Christine Valters Paintner, The Soul of a Pilgrim: Eight Practices for the Journey Within

Being a tourist is a lot different than being a pilgrim. We even prayed about it in our opening Mass. Being a pilgrim has some responsibility that goes with it—to extend hospitality and to practice humility and patience. We have been duly warned.

This experience is not just about sight-seeing. We don’t experience events and then move on. There is a river flowing beneath our lived experience, where we are feeling, processing, and reflecting. What we feel about or interpret an experience today may change tomorrow. This pilgrimage—the visiting of churches, monasteries, and historical sights—is just one level, but the pilgrimage within is the real experience.

But here we go…the first FULL day! (and it is full!)

Tuesday, June 18— We celebrate Mass in the morning at Kloster Banz, a former Benedictine monastery founded in 1070, now known as Banz Castle. In the second half of the 18th century, Banz Abbey was known throughout the Holy Roman Empire as a place of Catholic enlightenment and for the scholarship of its monks. This did not save it from secularization and dissolution in 1803. Today it serves as a parish church. The Abbey is not what it once was, but it continues in another way. 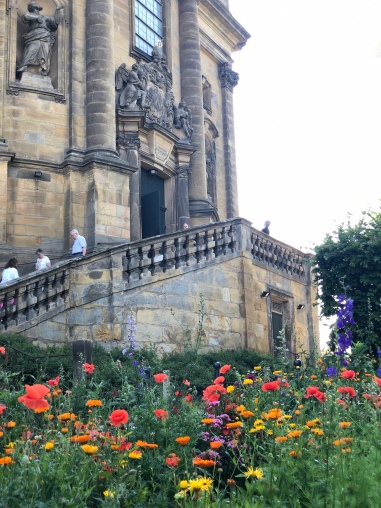 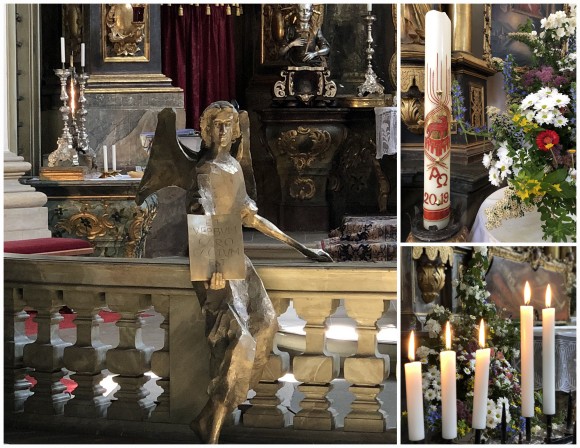 Next, we visit the 18th-century Franconian baroque Basilica of Vierzehnheiligen, also called the Church of the Fourteen Helpers in Distress. 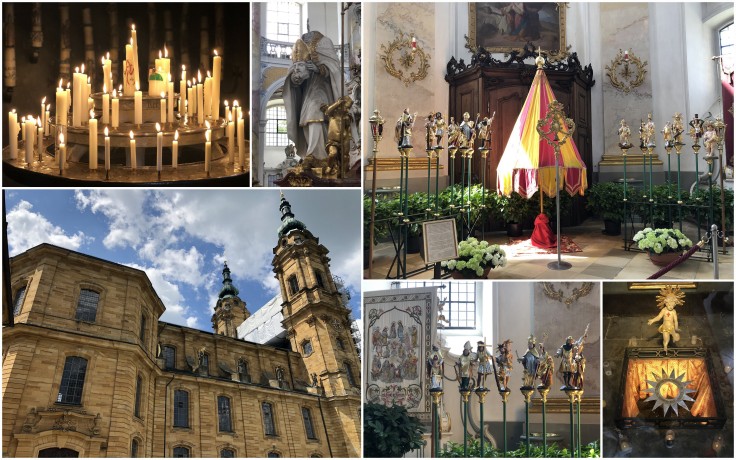 Next stop, Bamberg. Oh, how I wish we could have had more time here. This is a place I will go back to! 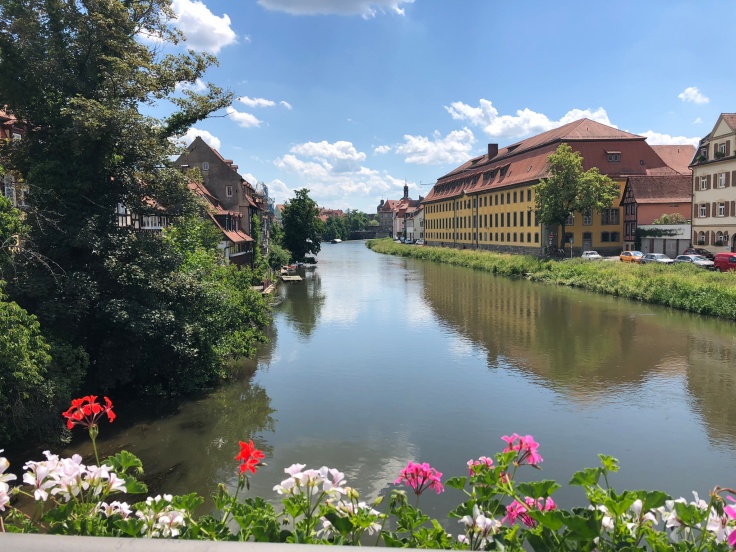 Bamberg, the beautiful town and cathedral, are a UNESCO World Heritage site in the north of Bavaria, Germany. We had an amazing tour of the Domplatz, a 13th-century cathedral, which includes the tomb and relics of Emperor Henry II and his wife, Cunigunde. King Henry is the founder of Benedictine Oblates and was canonized in 1146.

The slab cover of their tomb portrays the imperial couple and the side panels depict scenes from their lives including Henry’s cure from kidney stones (pictured below) and the weighing of his soul after his death. The Cathedral also includes the Chapel of the Heads, dedicated in 1997, located beneath the northern spire of the west choir. The heads of Saints Henry and Cunigunde lie resting in a glass shrine. Read more about King Henry, patron of Benedictine oblates HERE.

One can appreciate the rich architectural heritage of Bamberg, the long history, which survived the Thirty Years’ War and World War II with little damage. I am reminded that throughout history both church and government have experienced life, death, new life, more death, and so on. As an American, I can hardly wrap my head around 1000-year-old buildings when our young country is not even 250 years old. We have much to learn from history.

I could have spent all day in the Cathedral and exploring the town of Bamberg. I hope to do that one day (and this time with my husband!)

Next, a quick stop at Pommersfelden Castle, a former aristocratic house, built between 1711 and 1719. The Palace contains a private Baroque art collection in Germany (that we were not allowed to photograph.) 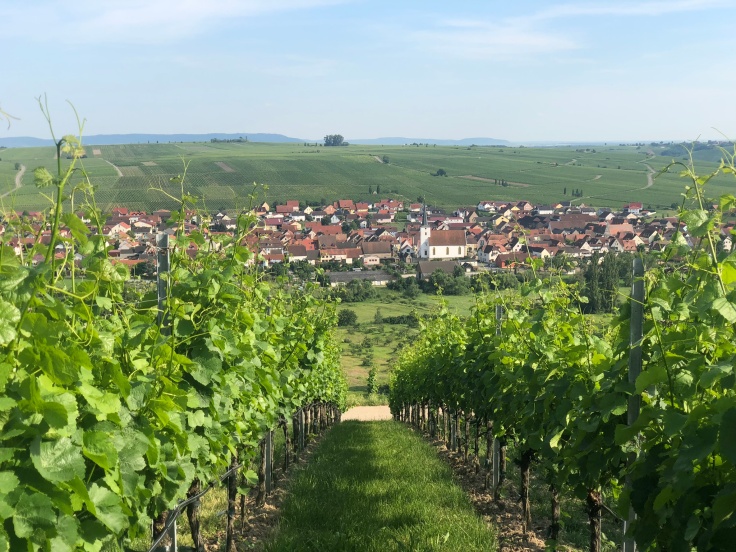 We pass through small villages and vineyards on our way to the Kirch Winery. The Kirch family has connections for many years with Fr. Volker and Virginia, our liturgist and pilgrim, so we are greeted with the hospitality of family members. The Kirch children are part of the business as well—they greet us with wine, a tour, dinner, and wine tasting. It was a wonderful way to end our first day on the road. 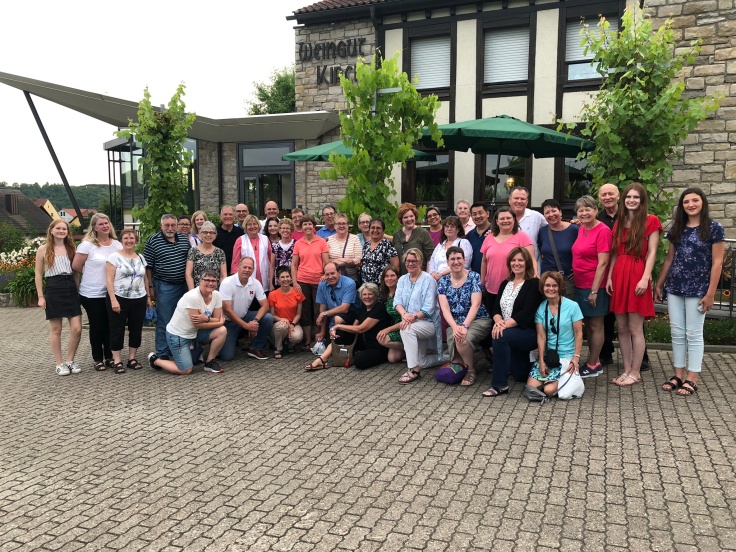 I consider the difference between being a tourist and a pilgrim. It seems to be a tourist is about gathering experiences for the sake of it; being a pilgrim goes beyond the experience, extending to what we learn from it and how we can give of ourselves.

What do you think is the difference between a tourist and a pilgrim? How do you show hospitality to your family, in a group, in your workplace, to yourself? What can we learn from the Rule of St. Benedict on the core principle of hospitality?

“Let all guests who arrive be received as Christ”—Rule of St. Benedict 53:1 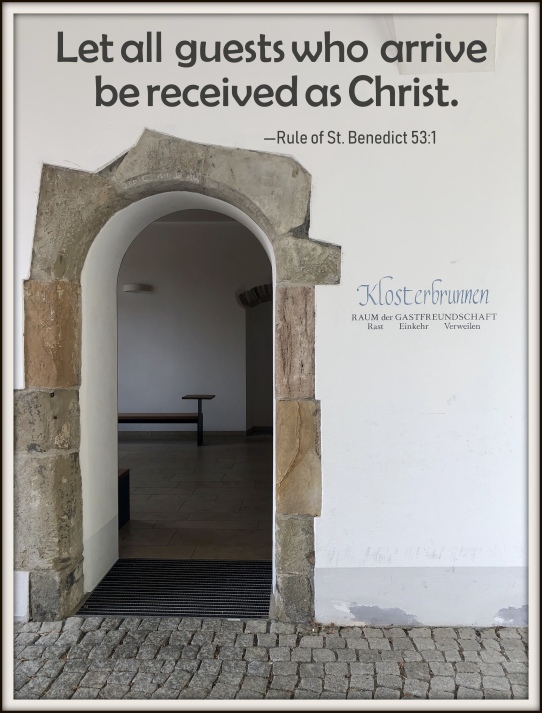 One thought on “Pilgrims Are Not Just Tourists: A Benedictine Pilgrimage, Part 5”