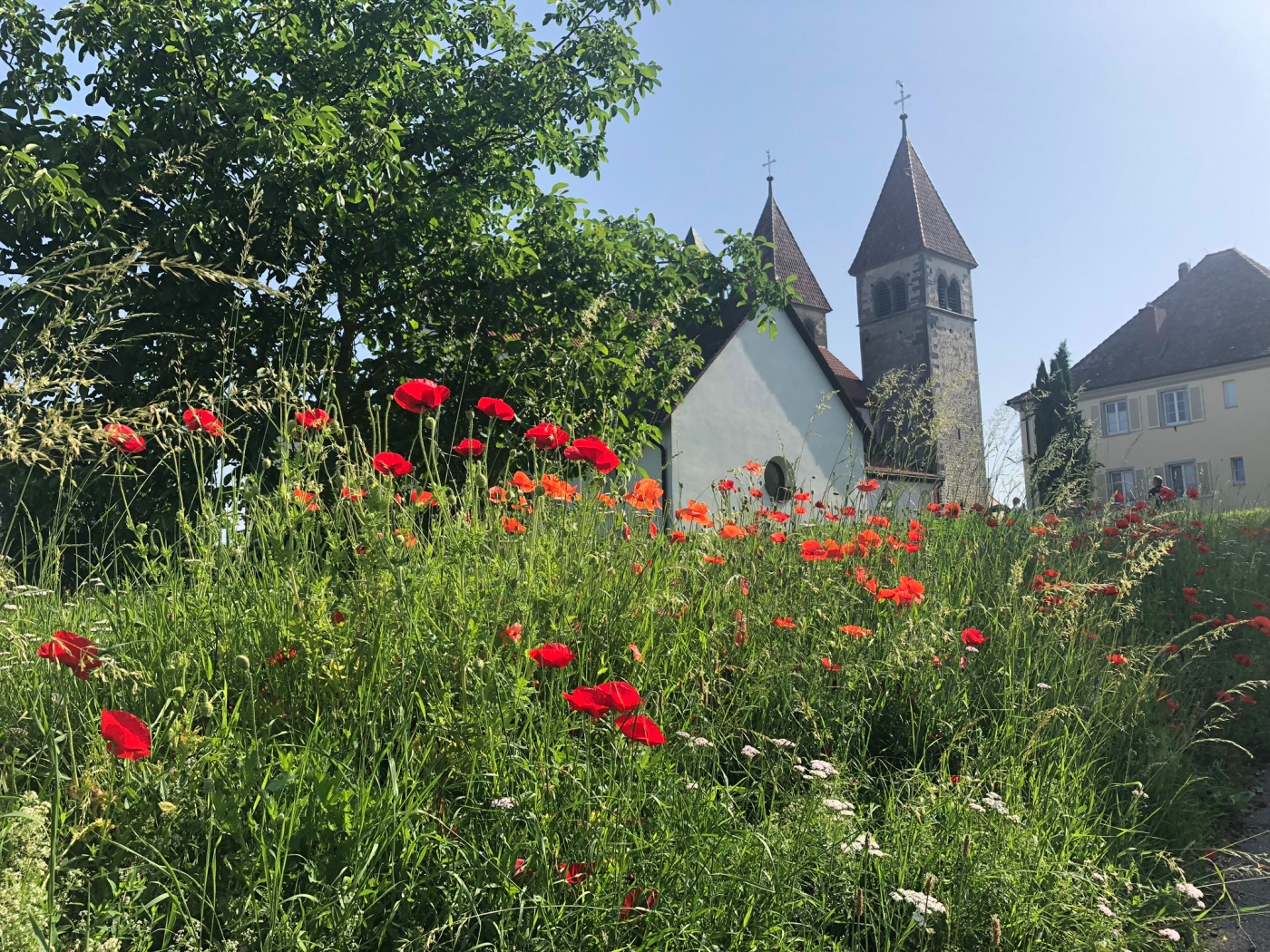 Today we visit the beautiful and historic monastery island of Reichenau in Lake Constance, a quick stop in Meersburg, and a chance in the evening to do some exploring in Constance where we stay again for another night.

Reichenau Island is one of 31 important sites in Germany that are on the UNESCO World Heritage List, a testimony to the religious and cultural role of this large Benedictine monastery of the Middle Ages. The Benedictine monastery was founded in 724, by Bishop Pirmin, considered to be the first abbot of Reichenau Monastery. The Monastery served as an imperial abbey during the Carolingian Empire, with special allegiance to the king, serving as Europe’s premier educational and training center. 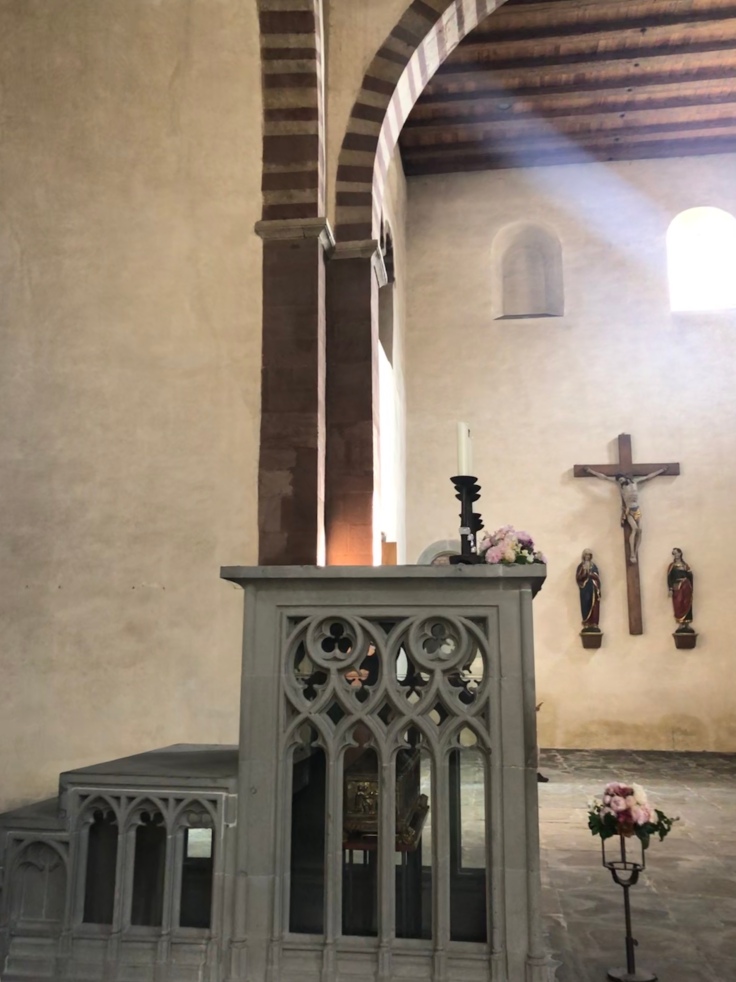 Three Romanesque churches, which remain unchanged, from the 9th to 11th century are examples of great architecture and art. Reichenau had become well-known for poetry, music, science, manuscript illuminations and art as well as politics, horticulture and the design of Benedictine monasteries, called “Galler Klosterplan.” Forty of the famous Reichenau Codes, illuminated manuscripts, have been preserved and are in libraries throughout the world.

In the early 15th century, only two monks remained on the island. By the 18th century, the monastery was all but defunct having had its heyday from the 8th-12th century. Two monks with great contributions are Walahfrid Strabl (842-849), a well-known poet and Hermann the Lame (1013-1054), a university scholar, theologian, mathematician, historian, musician and astronomer. Hermann the Lame introduced precise counting of years before and after the birth of Christ and legend claims he wrote Salve Regina (although most musicologists now regard it as anonymous). Salve Regina, a Marian hymn also known as Hail Holy Queen, is sung in different seasons in the liturgical calendar, at the end of the Rosary, and at Compline. 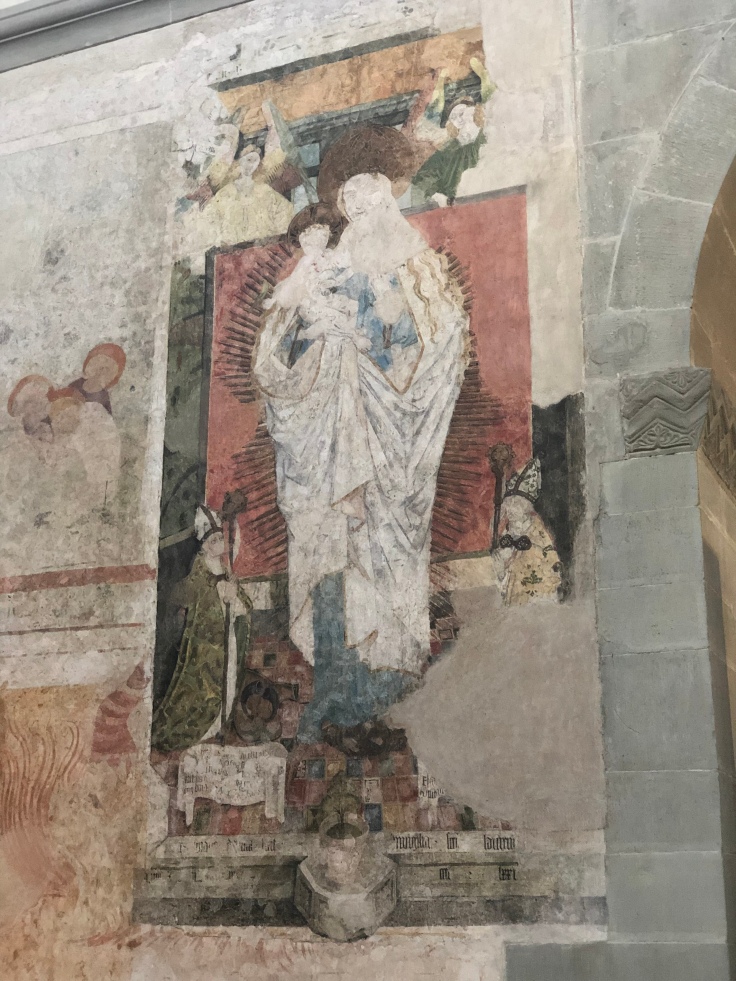 After 250 years, the island is again occupied by Benedictine monks who have founded a small cella. Fr. Stephan, one of the monks, shared the very special history and renewal story of the monastery island of Reichenau while we toured the churches. The residents of the island join in daily prayers and the monastery seeks to be a part of the community of laypeople. While visiting with Fr. Stephan, our pilgrims broke into spontaneous song, Salve Regina, written by Hermann von Reichenau.

It would be a dream to live on Reichenau Island in this inclusive Benedictine community—such a beautiful combination of community living, honoring both past and present—the daily practice of Christian prayer and tradition while also being open to change. Is this the future for Benedictine monasteries?

After our visit to Reichenau Island, it got REALLY HOT! Lunch together inside the Grand Hotel required frequent blasts from Virginia’s envied battery-controlled fan. 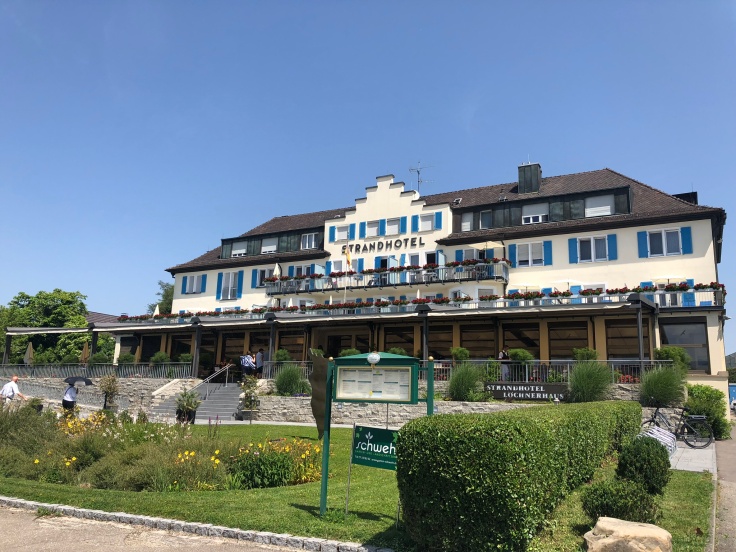 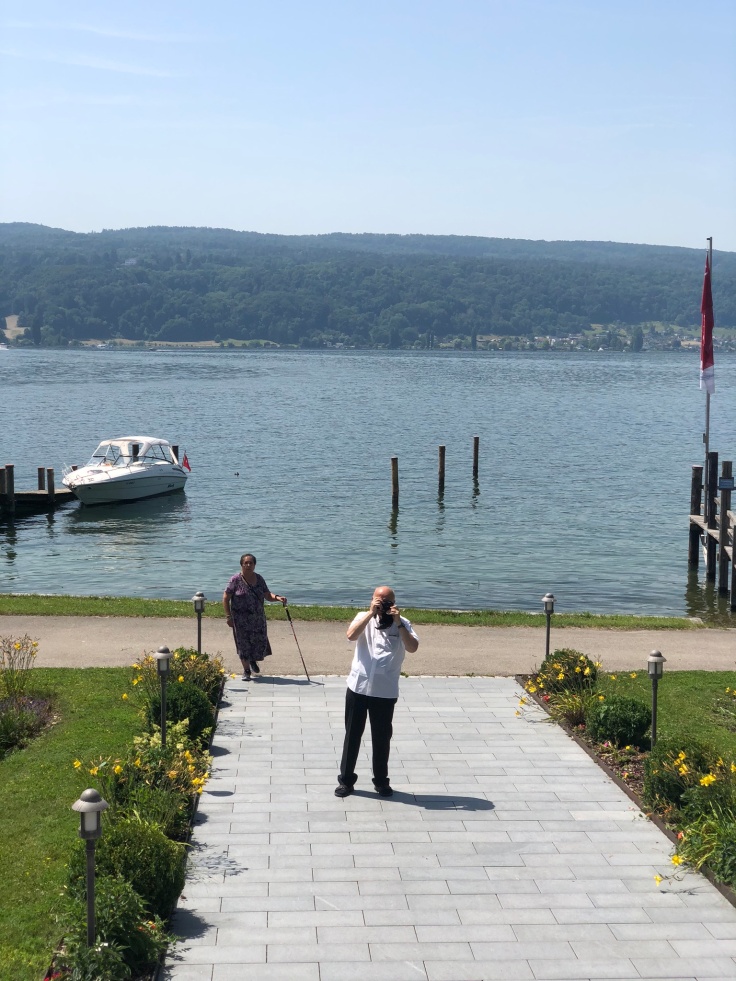 As always, the food and wine were amazing! 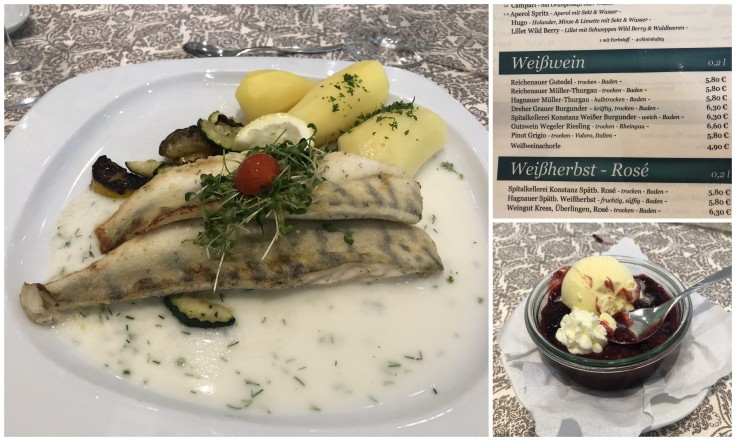 Our next stop is Meersburg, a beautiful village built on a steep vineyard next to the lake. The steep and windy streets and shops were appealing, but with the temperature over 100 degrees Fahrenheit, I chose to rest by the lake. 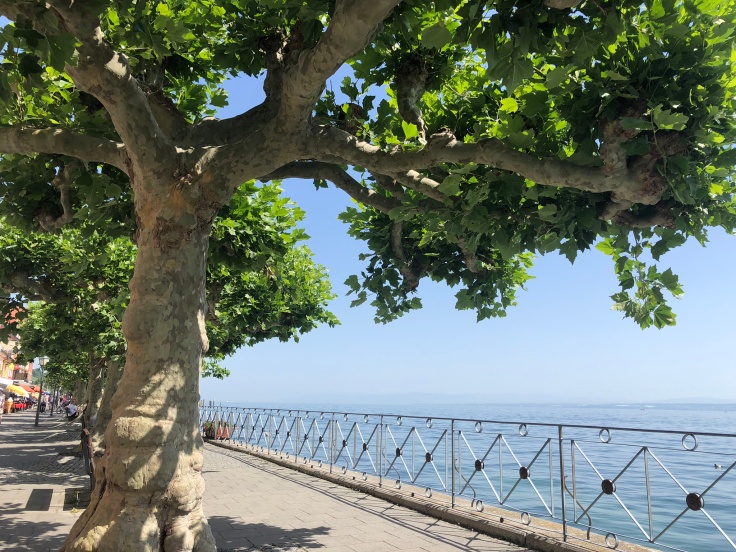 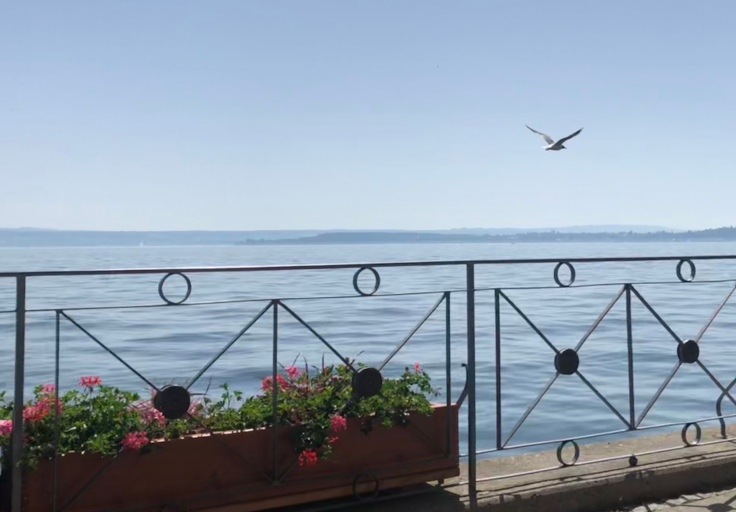 We end the day back at our beautiful hotel in Constance and a chance to wander the old town, walk by the lake and have a relaxing evening. 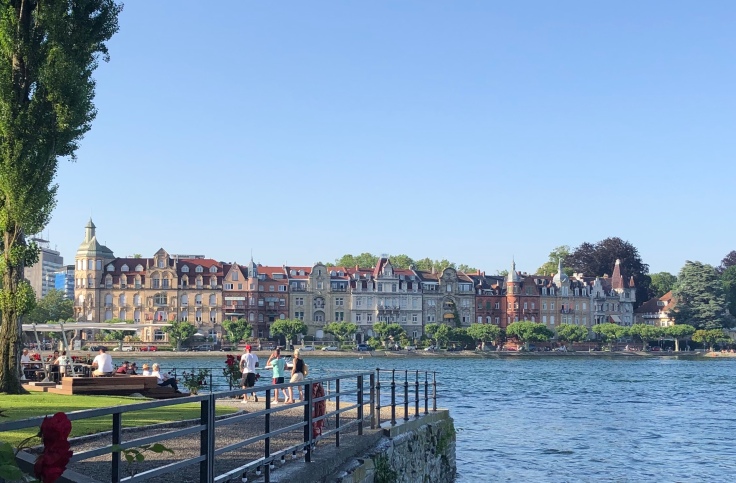 p.s. Our prayer for the day was so powerful and so timely one year later. 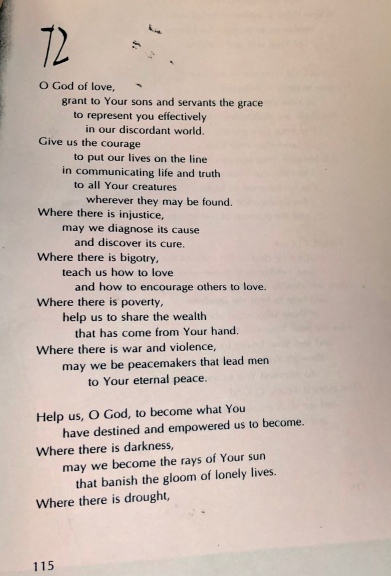