St. Benedict is pretty special to me for a few reasons.

First, we share a birthday. I have to admit that I was pretty disappointed when I first discovered this. My parents had given me an illustrated book of the “Lives of the Saints” to commemorate my Confirmation. As any nine-year-old would do, I immediately looked to see who the saint was for July 11, my birthday. Perhaps Elizabeth or Mary, Theresa or Christine (my confirmation name) would be my special saint. A lovely woman saint with a beautiful name—I had hoped. 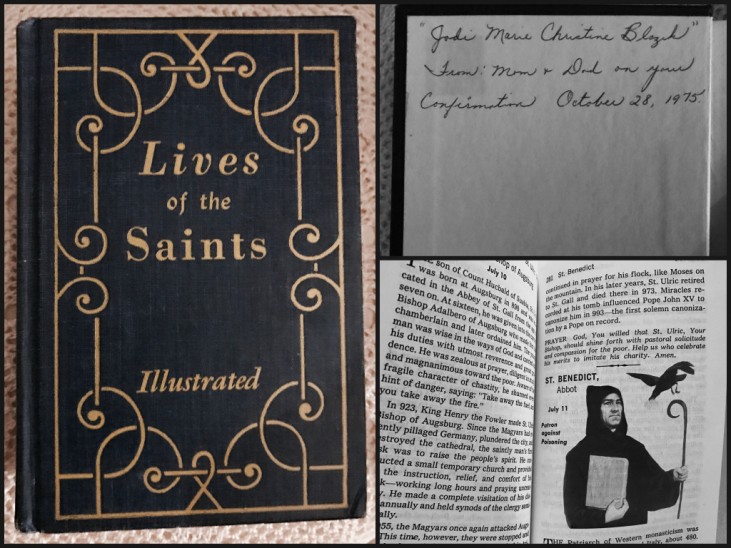 Instead, I beheld an illustration of a man with a dark hood, a scary looking bird, some sort of walking cane and an unusual name that I had only associated with Benedict Arnold, a famous American traitor.

I had never heard of this saint and surely did not know what an Abbot was. Through the years, I returned to these pages about St. Benedict often, thinking that I should have some connection with this man, my patron saint.

Fast forward 26 years. I am married with a seven-year-old daughter, a high school teacher, and club sponsor. I live a full and busy life, but have a deep desire for silence and prayer. I respond to an advertisement in our local newspaper for a silent contemplative prayer retreat and discover an oasis of peace called the St. Benedict Center in Schuyler, Nebraska.

And then I remember St. Benedict. My saint.

I have learned a lot about St. Benedict and Benedictine spirituality since then (17 years ago.) I’ve been to dozens of workshops and retreats at St. Benedict Center, made my Final Oblation to become a Benedictine Oblate of Christ the King Priory and have gone on three Benedictine Pilgrimages to Europe.

Now I know that sharing the same birthday as St. Benedict has been the best (birthday) gift I could have received.

I have learned that St. Benedict made the ultimate pilgrimage when he left his life as a student in Rome, frustrated with the political environment and the behavior of his classmates, to spend three years in solitude in a cave near Subiaco.

I understand this desire for solitude, to retreat. This desire is what tugged at my heart when I discovered St. Benedict Center in 2002. Eventually, St. Benedict founded the Abbey of Montecassino, writing the Rule of St. Benedict. But, as with all pilgrimages, it didn’t happen overnight or easily. Benedict became famous and was sought out as a monastery leader. But he was also resented and despised, and his monks even tried to kill him off. Benedict was surely on an inner and outer pilgrimage.

“A pilgrimage is an intentional journey into the experience of unknowing and discomfort for the sake of stripping away preconceived expectations. We grow closer to God beyond our own imagination and ideas.” The Soul of a Pilgrim: Eight Practices for the Journey Within, Christine Valters Paintner

I thank God for Benedict’s pilgrimage, for his journey of the soul, that his Rule was written down for countless people to learn from, even 1500 years later.

O God,
who made the Abbot Saint Benedict
an outstanding master in the school of divine service,
grant, we pray, that, putting nothing before love of you,
we may hasten with a loving heart in the way of your commands.
Through our Lord Jesus Christ, your Son,
who lives and reigns with you in the unity of the Holy Spirit,
one God, for ever and ever.
— Amen.
(Divine Office)

To learn more about St. Benedict, listen to The Life of St. Benedict –The Holy Rule of St. Benedict with Fr. Mauritius Wilde O.S.B.  There are several podcasts that reflect on the life of St. Benedict by using the biography penned by St. Gregory the Great. The first episode looks at the pivotal discernment he made as a young man to pursue the religious life. The aspect of detachment from our earthly family in favor of our Heavenly Father is explored by Fr. Mauritius.